“Moderating interest rates over the past few weeks could provide a window of opportunity for buyers this month, even if the Fed is widely expected to raise them again in December,” said Mike Grady, president and COO of Coldwell Banker Bain.

“We are continuing to see a balancing of the market,” Grady stated, citing moderating prices and increasing inventory as contributing factors in comments about the latest figures from Northwest Multiple Listing Service.

House hunters have a much bigger selection than a year ago. Northwest MLS figures for the 23 counties in its report show the year-over-year volume of inventory rose from 11,193 homes and condos to 15,830. The increase in active listings represents a gain of more than 41 percent. Members added 6,399 new listings to inventory last month, up from 6,098 for the same month a year ago.

King County registered the biggest gains, with active inventory surging 135 percent from a year ago. The number of single family homes more than doubled from a year ago, rising from 1,879 to 4,020, while the condo selection more than tripled, jumping from 355 active listings twelve months ago to last month’s total of 1,221. Eight counties reported fewer listings than a year ago.

“Months of inventory is still slim compared to historical norms,” Grady emphasized. Using this metric, both King County and the Northwest MLS market area overall have 2.3 months of supply. While supply is improving, it’s still well below the 4-to-6 month level industry analysts use as a gauge of a balanced market.

The surge in supply is not yet reflected in sales during this typically slower holiday season. Pending sales for November were down 10.4 percent from a year ago. Thirteen of the 23 counties in the report registered drops in pending sales versus a year ago. Compared with October, mutually accepted offers fell 17.5 percent. That was less than the falloff in 2017, when the volume of pending sales from October to November shrunk by 21.5 percent.

“This massive increase in the number of homes for sale in King County last month means we are officially on our way back to a more balanced market,” remarked OB Jacobi, president of Windermere Real Estate. “This is good news for buyers who just a year ago were in fierce competitions for very limited inventory,” he added.

“Buyers who were forced to look at outlying areas in Pierce or Snohomish counties are now coming back to core communities in King County,” reported George Moorhead, designated broker and owner of Bentley Properties. He said many such buyers are aggressively looking for their next home during the November to January timeframe, knowing they may be able to get concessions that were unavailable the past two years and also that “sellers tend to be more negotiable.

“This resurgence seems to be gaining momentum,” Moorhead noted, dismissing reports of “our real estate market teetering on a collapse.” Such reports “could not be further from the truth,” he stated.

Moorhead also called the bump up in lending limits for certain types of loans, announced in late November, as long overdue and “great news for buyers of homes in the most popular communities.”

Loan limits for mortgages to be acquired by Fannie Mae and Freddie Mac in 2019 are increasing for both conforming and jumbo loans. The Federal Housing Financing Agency [FHFA] announced the loan limit will rise from $453,100 to $484,350; the new ceiling for jumbo loans in high cost areas — including King, Snohomish, and Pierce counties – will be $726,525.

Northwest MLS director Dick Beeson said the combination of stabilizing factors, including more inventory and only slightly increased interest rates, coupled with “more receptive and savvy sellers” are resulting in a “more reasoned approach to buying and selling.” As inventory grows, he believes price increases will be “slower and smaller.”

The Kitsap County market is also different than Seattle, according to Frank Wilson, Kitsap regional manager and a branch managing broker at John L. Scott Real Estate in Poulsbo.

“Kitsap still has a good deal of pent-up demand, although our listing inventory is beginning to grow,” he stated. Even with a gain in the number of active listings of nearly 16 percent compared with a year ago, the current supply of 624 homes and condos is well below the 1,400 to 1,600 listings that typifies a “normal” market, according to Wilson.

“We still only have about 1.8 months of supply, we continue to see good traffic at our open houses and multiple offers on newly listed homes, and a correctly priced home will still sell in less than 30 days,” reported Wilson, a member of the Northwest MLS board of directors.

Another MLS director, John Deely, said recent increases in listings have led to changes in the Seattle market. “Most notably, buyers are taking more time and not feeling rushed to make quick decisions,” he stated. “Most of the contingencies allowing buyers to perform their due diligence, including financing and inspection, have returned to the purchase and sale agreements,” explained Deely, the principal managing broker at Coldwell Banker Bain.

Deely reported multiple offers on properly priced properties still occur but the escalating prices driven by multiple offers and cash buyers paying crazy “got to have it prices” are giving way to a “more normal and sane market.”

Northwest MLS representatives expect the tilt toward a more balanced market to continue:
• “I expect this trend (to a more balance market) to continue into 2019, which will cause appreciation to slow somewhat, while giving buyers more options,” stated Jacobi. “This does not mean the real estate sky is falling, rather it’s a much-needed shift towards a more sustainable, balanced market,” he emphasized.

• J. Lennox Scott, chairman and CEO at John L. Scott Real Estate, expects slightly higher unsold inventory between now and February “for the first time in years, instead of a market that’s virtually sold out.” Describing 2018 as a “transition year” from an extreme frenzy market to a “strong” housing market, he predicts the holiday backlog of buyers will start searching in January. “We will experience a strong/surge housing market in the spring, which will taper off to a strong market for the remainder of 2019.”

• Wilson forecasts a sellers’ market to start off 2019, and perhaps into the first part of the year. He suggests more areas of Kitsap County, such as Port Orchard, will experience positive effects of the new fast ferry, continuing what is already occurring in Port Orchard and Kingston.

• Moorhead said builders will still bank on continued job growth “even though huge concessions are being offered for completed homes as the yearend nears.” He predicts rising interest rates will have a modest impact on buyers entering or re-entering the market.

The Mortgage Banker Association, Freddie Mac and Realtor.com all expect mortgage interest rates to rise soon to a range of 4.8 percent to 5.1 percent.

Northwest Multiple Listing Service, owned by its member real estate firms, is the largest full-service MLS in the Northwest. Its membership of around 2,200 member offices includes more than 29,000 real estate professionals. The organization, based in Kirkland, Wash., currently serves 23 counties in the state. 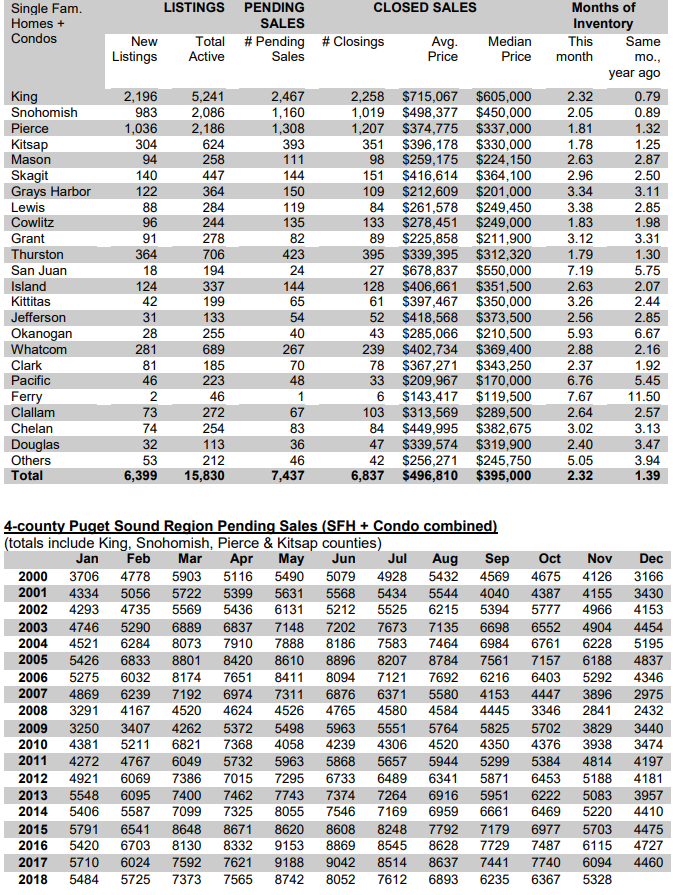